Remember last month when Harry Potter star Emma Watson who, as a UN Goodwill Ambassador, started to leave free copies of Mom & Me & Mom at different locations on the London underground? Shortly after the news broke, this sort of book-on-metro practice has become a fad in China with campaigns of a similar fashion being carried out. But would they have the same effect?

According to Chinese local media, 30-year-old white-collar employee Zhang Xuming was inspired by Emma Watson’s book-sharing practice and decided to follow suit in Guangzhou. As a book lover himself, Zhang enjoys reading books for at least 2 hours every day and keeps many books at home. It dawned on him that it may be a good idea to share his used books on the metro. 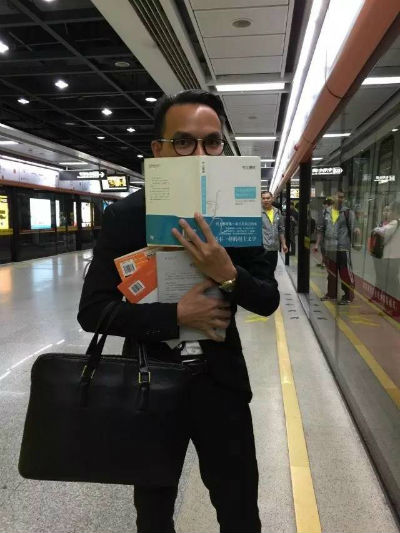 So that was what he did. On the morning of November 9th, Zhang brought 9 books onto the Guangzhou metro and left a note on each book similar to what Watson did in London. After placing the books on the seats, he stayed on the metro and wanted to find out how people would react to it.

Zhang’s supposedly exciting experiment, unfortunately, was met with a rather disappointing response as it did not pan out as he had expected. “Many people simply removed the book so that they could sit down; seldom would they pick up and read the books,” Zhang concluded after a day of observation. At the end of the day, four books remained untouched on the metro and one was taken away.

“People in Guangzhou lead a stifling life. They don’t usually spare time for reading on their way to work,” Zhang said. He speculated that people on the metro thought those books as more of objects owned by others rather than knowledge that they would like to read and pass on, “they may think the books belong to other people, and that they should not touch them.”

Zhang also wrote down the whole experiment and published an article titled “A young trainer left 9 books on Guangzhou metro, and this is what happened…” on his WeChat account. The article was viewed over 50000 times within two days and attracted over 500 comments. Some said that the experiment would go better if it had been announced beforehand, and others said that the Guangzhou metro is always packed like sardines, so people are more concerned with looking out for a seat rather than being in the mood for a spot of reading.

Zhang’s article also resonated with many book lovers who wanted to join the book sharing activities. Readers from Beijing, Shanghai and Hangzhou expressed how keen they were on starting similar events in their own cities. On November 11th, Zhang assembled roughly 120 like-minded book lovers in Guangzhou, who called themselves “book-sharing group” and started a new round of book sharing on the metro. This time, they prepared books with conspicuous labels on the book covers, and with messages from the book owners written on the first page.

One member of the group stayed on the metro to see what would happen. More passengers showed interest in reading the books and then placed them back to their original spots. One lady wanted to take the book back home with her – so the member went up to her and explained the purpose of the activity. She gladly left the book behind.

Some big organisations also wanted to replicate Emma Watson’s practice. On November 15th, a WeChat public account “Xinshixiang”, run by Beijing Shixiang Technology and Culture Company, launched its book sharing campaign in an article, which was immediately viewed over 100000 times. The topic trended on Chinese microblog Weibo the next day, attracting 190 million views and 141,000 comments.

Zhang Wei, CEO of the company said he was inspired by the activity in London and was eager to give it a go in China. He contacted the campaign organiser in London through email and soon got their support.

“We also invited famous people of different fields to join us. We hope our efforts can help at least one more Chinese person on the metro to find the fun in reading. We can’t predict how it will go, but I think it is worth a try.”

The company also partnered with metro, airline and cab companies to launch the campaign in concert. “We have got the support from Jinggang Metro, Hainan Airline and Didi Cab, which has made the campaign even wider and more efficient.” The campaign was met with enthusiasm from local movie stars like Huang Xiaoming and Zhang Jingchu, who participated by leaving books and making videos about it.

Wang Wei confronted these questions and reiterated that the campaign itself is free of any commercial interest, with a sole purpose to “awaken people’s love of reading and study”.

Whilst many internet users in China welcome the increase of this type of awareness-raising campaign for public good, some hold an oppositional view. One wrote on Weibo that, “is it even appropriate to carry out this kind of campaign on the perpetually crowded metros in these Chinese big cities? I’m afraid that it is passing on trouble instead of knowledge or happiness.” Some also accuse Chinese movie stars of joining the campaign in order to gain publicity, which is totally different from what Emma Watson did, “Emma Watson is a real book lover. Her passion for reading drove her to initiate such a campaign. For Chinese movie stars, they joined it because it is a campaign. They are fundamentally different,” one wrote.

The article was originally published on China Info 24 on December 9, 2016.